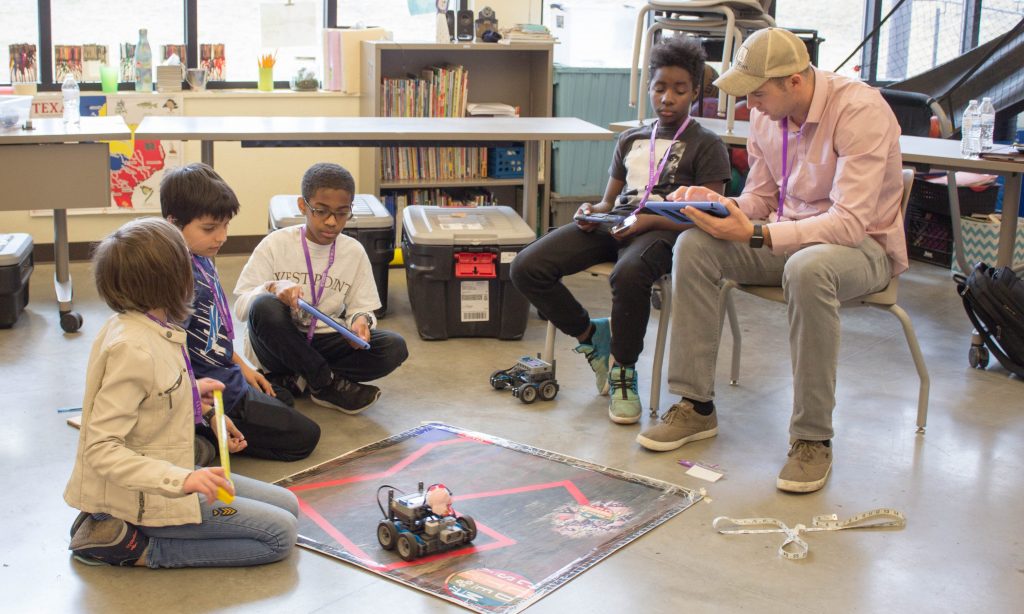 When 12-year old Housing Choice Voucher client Jason Jetter signed up for a robotics workshop taught by U.S. Military Academy at West Point faculty, cadets, and alumni, he hoped he was signing up to be a part of a BattleBots-style robot competition.

“I want to run into everyone – pretty much battle my robot,” Jason said.

However, Jason and about 39 other HACA middle school kids spent one Saturday last month learning much more than how to build and manipulate robots. They learned about career opportunities in science – a subject that peaked Jason’s interest – as well as technology, engineering, and mathematics (STEM).

Bieke Campos, an eighth grader who lives at Booker T. Washington Terraces, said his mom encouraged him to come to the workshop at Meadowbrook’s Henry Flores Education and Training Center. Bieke is interested in college, but isn’t 100 percent sure what his major will be. Going into the first portion of the workshop, Bieke said his favorite school subject was algebra.

But after working with West Point and U.S. Army Research Laboratory (ARL) volunteers to build a robot out of special building blocks and batteries, Bieke got a whole new outlook on the world of mathematics.

“I liked building the robots,” Bieke said as he took a break for lunch and watched other campers interact with West Point volunteers on the basketball court. “I’ve never done it before.” In fact, Bieke and most of his friends at the workshop liked robotics so much, they wanted to take their robots home.

The second portion of the camp consisted of campers putting their robots through their paces. The workshop participants were split into teams and were given an iPad and a map. They were told that at the end of the map, there was an island in dire need of Funyuns, an onion-flavored corn snack.

Each team was given 30 minutes to program their robots using an iPad app to make them maneuver the path and save the island from Funyun deprivation.

The energy in the room was electric as each team worked together to program their robots. The future tech and science scholars scrambled to measure distances on the map and calculate the angles of each turn. Some teams even programmed their machines to spin in celebration as they reached the fictitious island.

After programming was complete, the teams went head to head to see which robot would take the island its Funyons, and be named the ultimate hero of the day.

The students cheered on their friends’ robots as they inched closer to being named champion. Bieke and his robot, The Dark Knight, made it to the finals.

In the end, The Dark Knight was not victorious, but when the workshop wrapped, there was a noticeable advance in what Bieke and the other kids had learned about STEM. In that way, everyone who attended the camp was a winner.

“We are honored that the U.S. Military Academy at West Point and the U.S. Army Research Laboratory selected HACA as the site for this exceptional STEM workshop,” said HACA President and CEO Michael Gerber. “It will make a huge difference to our kids and helps them see the possibility of a bright future through STEM, hard work and a commitment to public service.”

A Look into a Future in the STEM Field

Lori Sheetz, director of West Point’s Center for Leadership and Diversity in STEM (CLD STEM), reminded HACA youth that the STEM fun didn’t have to end with the workshop. CLD STEM and ARL provided parents with information about USMA and Army Educational Outreach Programs, including a summer program at West Point.

"We also want the students to understand that there are so many opportunities for youth interested in STEM education through the Army Educational Outreach Program (AEOP) portfolio," Conn said. "We certainly want to provide a continuum of resources and events that support students’ interests in STEM education and Department of Defense careers."

Georgian Manor resident Joseph Williams, 12, knows all about the West Point summer STEM camp. He traveled to New York last year to attend the camp and pursue his dreams of one day becoming an astrophysicist. Joseph shared his experience with parents of the workshop participants.

Joseph talked about how at first, he was scared to leave his mom and travel far away, but he overcame those fears, saw New York, and is now a seasoned traveler.

“I think going out there by himself without myself or his brother helped him a lot,” said Joseph’s mother, Lenora. “It was a good learning experience. It helped him come out of his shell.”

Sheetz said STEM workshops offer an excellent opportunity to engage students in learning and motivate them to consider careers in high-demand STEM fields. STEM scholarships and the ARL also play an important role in promoting a diverse STEM pipeline.

Before everyone headed out the door, Austin Pathways, HACA’s nonprofit subsidiary, announced that although the kids could not keep their robots, they would each take home a free, refurbished laptop for their family. Each machine came pre-loaded with 32GB of interactive educational content.

“After this workshop I believe these kids realized that they are not only able to put together a robot, but that they’re also able to aspire to West Point,” said West Point alumnus and volunteer David Reyes. “The event was mutually beneficial to everyone involved – the kids discovered that if there’s something they want to do, they’re able to do it, and we were reminded that we need to be more involved in our community to give back.”

HACA is 80 years old and has produced a number of high-profile community leaders through various community partnerships. West Point has led efforts to prepare young leaders for our nation for 216 years. These three organizations have now joined forces to continue to foster the leaders of tomorrow.