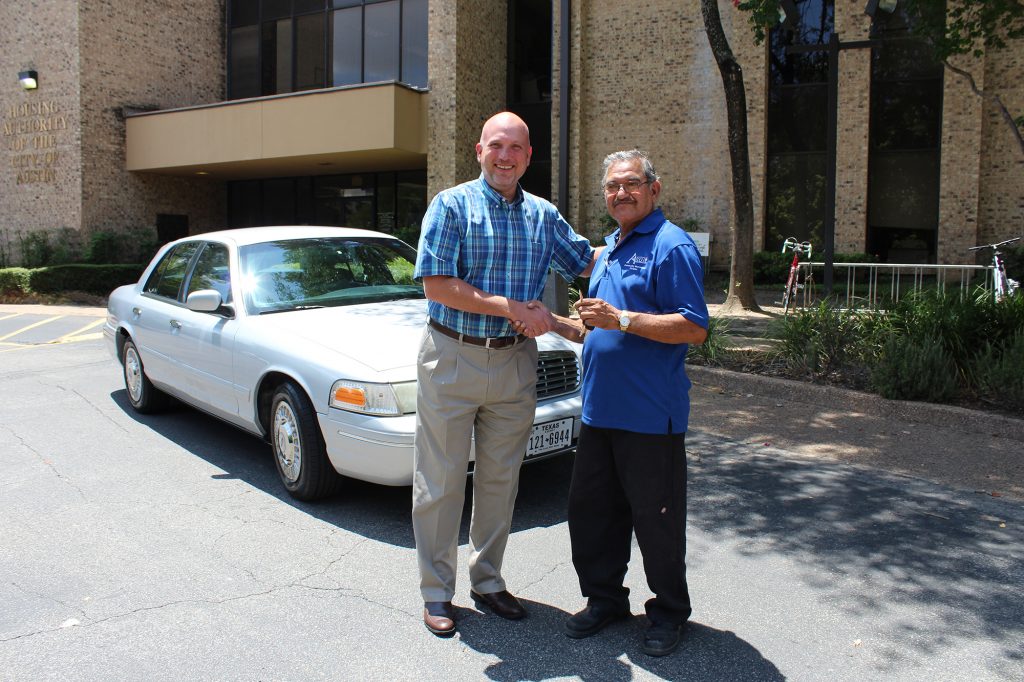 It’s been an especially hot summer for Booker T. Washington Terraces resident Reynaldo Sanchez Guerrero. Reynaldo has spent the last few months driving with no A/C to his job with the City of Austin building and grounds department.

However, thanks to HACA, Reynaldo’s future commute to work should be a lot more comfortable.

Reynaldo recently won a 2001 Ford Crown Victoria during a year-two kick off drawing for HACA’s Jobs Plus ATX program. The car was retired from HACA’s fleet and donated to the Jobs Plus incentive program.

Unlike Reynaldo’s current vehicle, his new car has an air conditioner.

“I’m really happy,” said Reynaldo, who has lived at Booker T. Washington Terraces for about two years. “It means a whole lot because I have extra transportation to come and go. My first vehicle ... I do have some problems, and I have to fix them.”

Jobs Plus ATX is a program that helps public housing residents like Reynaldo at Booker T. Washington Terraces and Chalmers Courts access tools to work their way to long-term employment and self-sufficiency.

Jobs Plus participants are eligible for Jobs Plus Earned Income Disregard (JPEID), which means zero percent of increased earnings are counted when calculating rent.

Since Jobs Plus ATX began in July 2016, 132 families have gone to work or increased their income, resulting in $303,306 in additional earned income, and 155 individuals have started new employment.